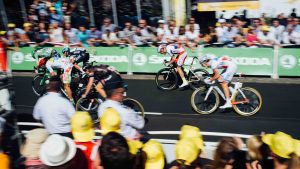 The U.S. Department of Justice (DOJ) announced that Lance Armstrong, a former professional cyclist, has agreed to pay the U.S. $5 million to resolve a whistleblower lawsuit regarding allegations that he violated the False Claims Act (FCA) by using performance-enhancing drugs and methods (PEDs) while sponsored by the U.S. Postal Service (USPS).

If you are aware of a professional athlete or team violating a federal or state government sponsorship agreement, contact a San Francisco qui tam attorney at Brod Law Firm.

The case against Armstrong was originally brought by a former teammate, Floyd Landis, under the qui tam provision of the FCA. Landis filed the qui tam case in June 2010, claiming that Armstrong participated in PEDs while a member of the USPS-sponsored team. Landis admitted he did, too. The U.S. government investigated the claims and decided to intervene in the whistleblower lawsuit.

Between 1996 and 2004, the USPS sponsored a professional cycling team, which included Armstrong and Landis. The sponsorship required all riders to follow the rules of cycling’s governing bodies, including all of the rules against PEDs. Between 1999 and 2004, Armstrong was the lead rider on the cycling team, and he won the Tour de France six consecutive times.

The government alleges that Armstrong and his teammates regularly and systematically used PEDs, which violated the sponsorship agreement. He additionally publicly and privately made numerous false statements in regard to PEDs in order to induce the USPS to renew its sponsorship agreement and to increase the sponsorship fees, which included his salary. Armstrong went so far as to lie regarding his use of PEDs in an arbitration proceeding regarding his right to a bonus from winning the 2004 Tour de France and to file lawsuits against Times of London and a former team masseuse. Armstrong also threatened to file similar lawsuits against other individuals who could have disclosed information regarding his PEDs activities.

The government alleges Armstrong violated the FCA by making false claims in order to wrongful receive compensation from a government agency.

A Resolution After Years of Scandal

The controversy regarding doping in U.S. cycling has been going on for decades. Armstrong was first accused of doping after the 1999 Tour de France. In October 2012, a report from the U.S. Anti-Doping Agency found Armstrong and his teammates engaged in doping, such as blood transfusions, cortisone, EPO, hGH, and Testosterone. He was stripped of his titles and banned from competitive cycling. In January 2013, Armstrong publicly admitted to his use of PEDs in a T.V. interview with Oprah.

In April 2018, the U.S. announced the resolution to the FCA whistleblower lawsuit against Armstrong.

“No one is above the law,” said Acting Assistant Attorney General for the DOJ’s Civil Division Chad A. Readler. “A competitor who intentionally uses illegal PEDs not only deceives fellow competitors and fans, but also sponsors, who help make sporting competitions possible. This settlement demonstrates that those who cheat the government will be held accountable.”

Armstrong will pay $5 million to the U.S. government. Landis, as the whistleblower, will receive $1,100,000 from the settlement.

Are You Aware of Violations of a Government Sponsorship?

Many athletes and teams train or are based out of California, and they may receive sponsorships or funding from a state or federal government agency. If an individual athlete or team receives any governmental funding, then they are responsible for following the requirements of that funding or sponsorship agreement. If they violate that agreement, then there may be evidence they submitted or made false claims in order to be wrongly compensated. This could lead to an FCA claim against the athlete or team.

If you are aware of an athlete lying, violating a rule of the sport, or breaking the law in order to receive government funding, contact San Francisco qui tam lawyer Greg Brod.